Picture this: You wake up one Monday morning to the news that a music video you edited just got 3 million views on Youtube. You pinch yourself, right? Cause that’s what we did.

We were blown away to recently discover a music video we edited of Journey performing for UNICEF Won’t Stop, a virtual fundraising event produced by Erich Bergen and 6W Entertainment, has indeed reached the 3 million views milestone. They performed their legendary anthem Don’t Stop Believin’ remotely, quarantined safely in their homes, and then we melded it all together with our team’s music video editing skills into… well… just watch it for yourself.

We sat down with our COO Garrett Kafchinskiand Editor Adam Trilling, who stayed up late one Saturday night to pull this together, to talk about this particular music video editing journey.

Garrett: This video was posted May 24th 2020, so we were really in the heart of you know, the first wave of the pandemic at this point.

Adam: It feels like it was two months ago. That’s wild. I don’t even know what I was doing nine months ago.

What was the process like for you to edit this piece together?

Adam: I kinda got into some sort of groove after cutting the first 30 seconds and I just continued at that pace. And then it was like I was the seventh band member kind of.

You gotta take guesses as to what these people would actually want to be seen and in what order. So, if I was the singer, I’d be like, when would I want the singer to be in the middle of the frame and when do I want him to have his own frame. Make educated guesses on what the band might want to be highlighted.

How long would you say it took to edit it together and get it ready for the Sunday show? What was the turnaround time? You got the footage the day before the event went live, is that right?

Garrett: Yeah, the full story is that MSNBC didn’t want to air the show unless Journey was in it.

And at this point, it was so late in the game and we didn’t get the files in time. I mean, the show was supposed to be done days before and approved and everything. We thought we weren’t going to incorporate the Journey footage because it was so late. The show was airing Sunday and then that Saturday evening we got the footage around 7pm/8pm. I reached out to Adam on Slack, “Hey, are you around?” He was and then we tag-teamed the multicam editing. I built a five-shot, all sorts of grids.

We probably finished the edit by 11:30pm. Then I was up until 3 or 4am sending the final through to MSNBC. 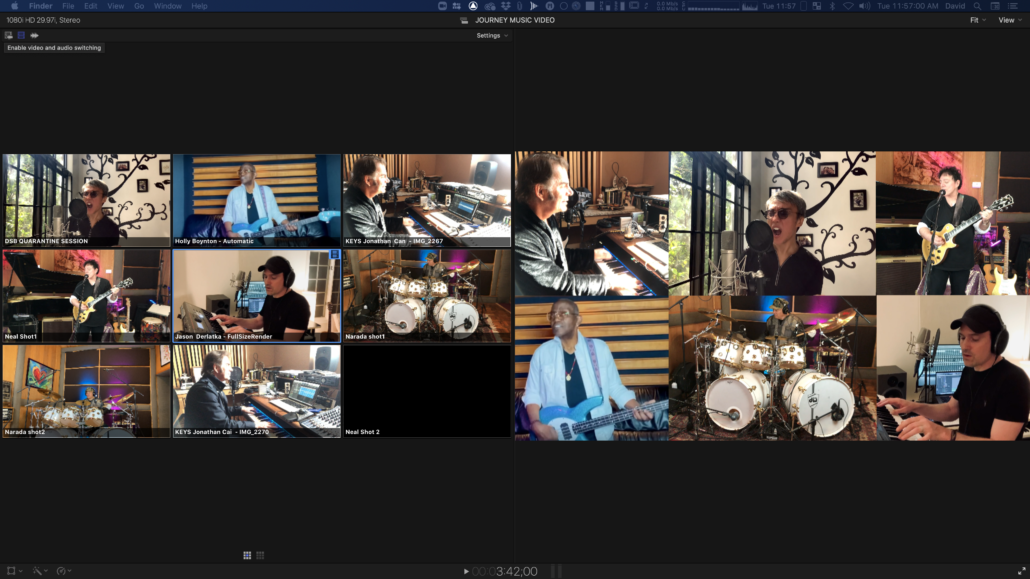 What’s unique about music video editing rather than editing other kinds of video segments?

Adam: Rhythm becomes the whole thing. You have to find the natural rhythm of how the song was made and then transport that back into the edit that you’re cutting.

I worked on editing music videos for years and then I switched to skateboarding videos, which are driven by music. So I’ve learned to cut to the beat.

What advice would you give to somebody who’s brand new to editing music videos?

Adam: Every time you want to snap your fingers, you should make a cut.

You can even, you know, instead of it being snap/cut/snap/cut, you can have three snaps and then a cut. Another thing is blinking too. Every time someone naturally blinks it’s a potential cut. So when you blink, you open up to a new shot. It’s supposed to mirror what we pay attention to in real life.

Would you say it’s helpful for somebody who’s editing music to have a musical background themselves?

Adam: Oh, a hundred percent. Yeah. You feel more in tune with what the musicians would hope you’d cut. It just helps in general. I play piano, a blues and jazz sort of mixture. I also mix beats.

Anything else important to note?

Garrett: UNICEF Won’t Stop was a really big show. Luckily by the time the show came around, we had already ironed out a lot of the technical details for our remote virtual workflow.

We had already started using Dropbox, PostLab, Final Cut, FrameiO. So it was possible for Adam and I to trade project files very quickly that night.

It was pretty cool to be at that spot where we had all the workflow down by that point. It was nine months ago and I feel we’re so much better now than we were at that point. It’s just kind of crazy to think about how quickly we were able to adapt and how much more there is still to learn.

Thank you Garrett + Adam, for the sneak peek into your late-night editing Journey.

The whole DGNL family is excited that a vaccine is making the rounds to protect against COVID-19 in New York and across the USA. This last year has been dark, but we won’t stop believing things will keep getting better.

And, if you’ve got a music video that needs editing, shoot us an email, we’ve got you.

The Brief Our Virtual ‘Talk Show’